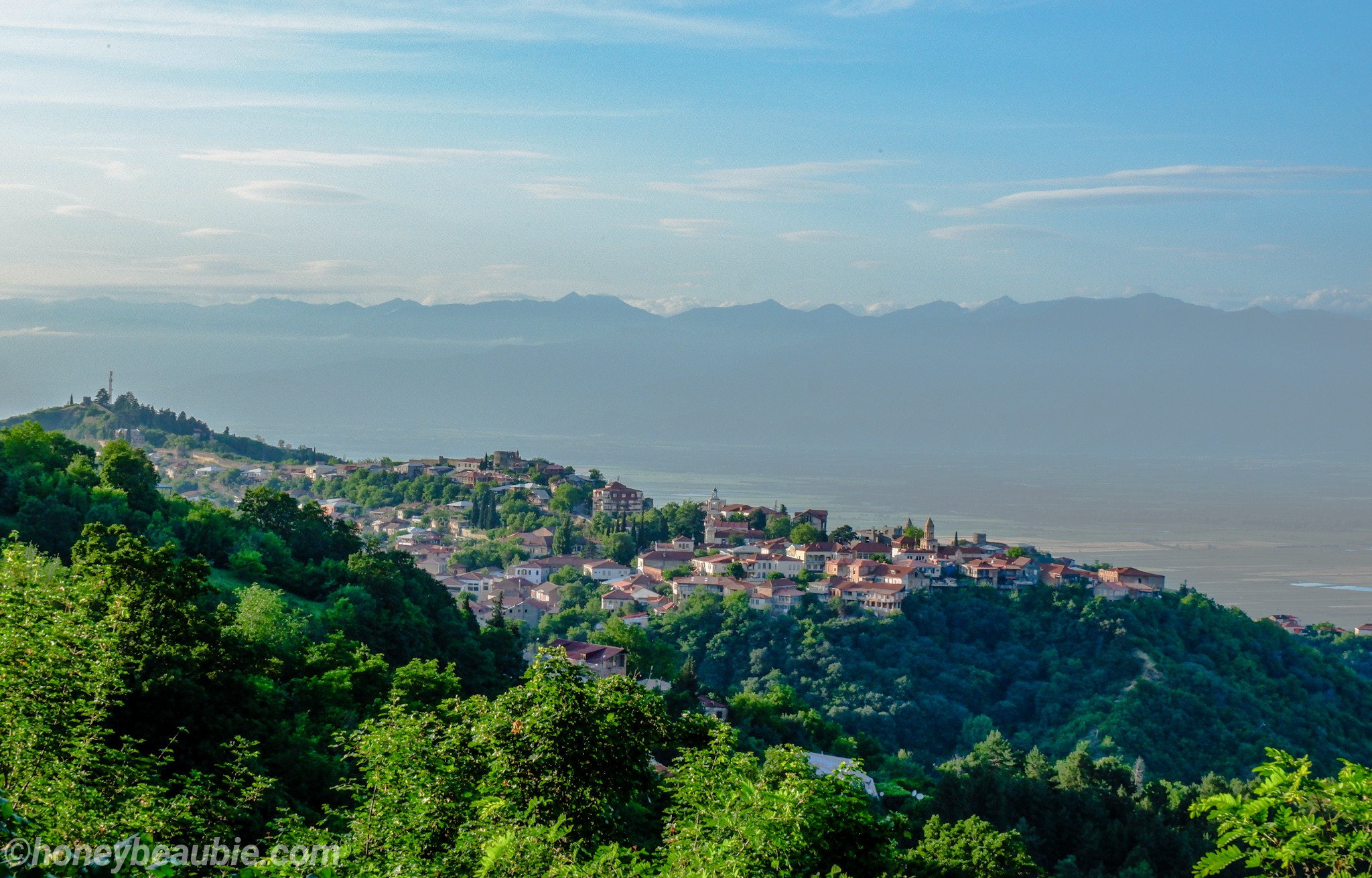 Our Kakheti Day Trip from Tbilisi: Itinerary, Cost and Duration

We started early to make the most of the day and do everything included in our Kakheti day tour package, which took us to the following beautiful and historic destinations in Georgia:

How far is Kakheti from Tbilisi?

Kakheti day tours are extremely popular among tourists, especially those coming from Tbilisi. The drive from Tbilisi to Kakheti takes approximately 1 hour and 30 minutes, but you wouldn’t feel bored or tired as Georgia’s picturesque landscapes will entertain you along the way.

What is the weather in Kakheti in May?

We went there near the end of May, the start of summer in Georgia. It was extremely cold in the morning, but the weather became sunny all throughout, with a few short rain showers. We booked our Kakheti day trip with Irakli, who was referred to us by Norik, our Armenia tour provider.

For a group of 4 people, we found Irakli’s Georgia tours to be very affordable, so we booked his company’s services for the rest of our day tours in Georgia (Ananuri-Gudauri-Kazbegi and Jvari-Mtshketa tours).

Planning to travel to Armenia? We’ve listed the best places to go to in Armenia here!

We saw some iconic landmarks in Telavi, including a palace and fortress for kings called Batonis Tsikhe and this vast and beautiful Lake Resort, which is a popular summer destination in Kakheti province.

The Batonis Tsikhe castle was the official residence of Kakhetian kings throughout the 17th to 18th centuries. Built in 1667 to 1676 by King Archil, Batonis Tsikhe is widely regarded as the best preserved medieval royal palace in all of Georgia.

Inside the castle grounds are two churches, a royal bathhouse and a Persian-inspired palace commissioned by King Erekle II, who also expanded the castle’s estate in the latter part of the 18th century.

Right outside the Batonis Tsikhe fortress is an imposing statue of King Erekle II, seemingly guarding his castle and overseeing his people and territory.

From Batonis Tsikhe, we had a quick detour to Ilia Lake resort, named after Ilia Chavchavadze, who was a famous Georgian writer and also highly esteemed and called “Father of the Nation.”

It was cloudy and cool when we visited Ilia Lake, but I could imagine it would really be popular in the summer, with its stunning and serene views. It’s the perfect summer destination for some relaxation and recreation!

Our second stop: Winery Khareba -A Kakheti Georgia winery built into a hill

For lunch, we headed to Winery Khareba where we wolfed down delicious traditional Georgian food! We even had a taste of pure, freshly squeezed grape juice – it was sweet and refreshing!

Our view during lunch! This vineyard is where they get their grapes from, so it’s all fresh and carefully selected. During harvest season, they offer tours in the vineyard, plus an experience to pick grapes and make wine!

Winery Khareba is popular for its 8-kilometer long wine tunnel dug out of a hillside, which was opened in 1962 to host the World Wine Congress. Its unique location is perfect for storing and ageing wine, which requires constant temperatures all throughout the seasons.

After our sumptuous lunch, we went to the winery for our wine tour. We chose the tour that also includes bread and churchkela making.

For this tour, we had a very nice lady as our tour guide, Ms. Bella. She was very kind, helpful and patient, letting us get away with our crazy antics!

She taught us the etiquette of wine drinking and pouring, some history of Georgian wines, and how their wines are made and stored.

Our wine tasting tour with Winery Khareba included tasting 3 wines with varying tastes and potency, and a platter of cheese!

I honestly loved Georgian wine more than Armenian wine. It’s sweeter, fruitier and lighter, whereas Armenia’s wines had a stronger and bolder flavor.

After our wine tour, we had our next lesson: how to make churchkela!

Churchkela is a traditional Georgian sweet made of freshly crushed fruit juices, such as grape and mulberry, then complemented with tasty nuts: walnuts, almonds and hazelnuts.

The ingredients were already prepared for us, so we just had to learn the process. *wink*

(In Armenia, they have similar sweets called rojik or sweet sujukh. We found a lot of local vendors selling them at the foot of Geghard Monastery.)

As we let our churchkela dry and solidify for a while, we proceeded to the next part of our tour: making traditional Georgian bread!

The dough was already prepared for us, and we just had to add drops of water to the dough and knead it a little. Then it was time for us to bake it in this traditional brick/clay oven.

We stuck the dough to the oven’s inside surface – which was actually difficult to do because it was scorching hot!

In just a few minutes, our bread (shotis puri) is cooked!

After our traditional Georgian bread making session, we went back to where our churchkela were drying and took them with us.

Signagi (also sometimes spelled as Sighnaghi) is a lovely and quaint little town in Kakheti region.

Surrounded by stunning views and with an abundance of its own charm, it is no wonder Signagi is heralded as the City of Love in Georgia and a favorite honeymoon destination among newlyweds.

Just look at that! You can really feel the romance in the air!

Taking a stroll around Signagi:

Signagi is also the site where one of the most significant landmarks in Orthodox Christian faith is located: Bodbe Monastery.

Built in the 9th century, Bodbe Monastery currently functions as a nunnery – only nuns manage the entire complex, and as far as I can remember, there is no priest at the monastery.

Bodbe Monastery is also a major pilgrimage site in Georgia, as it is where the tomb and remains of St. Nino is enshrined. St. Nino is a female evangelist credited for bringing Orthodox Christianity to Georgia.

Bodbe Monastery is one of the most beautiful monasteries I have ever seen in the Caucasus countries of Armenia and Georgia.

The nuns do an excellent job of keeping the place clean and beautiful. The Cypress trees in the site are green and healthy, as well as the flowers adorning the complex everywhere!

(I really enjoyed taking photos of the flowers!)

If you’re planning to visit Georgia soon, here are some of the best places and destinations in Georgia you should visit! https://honeybeaubie.com/travel-to-georgia-europe/

It is one of my favorite destinations in Georgia!

Other Kakheti Destinations worth a visit

We were not able to go to these places since we only spend one day in Kakheti, but from what I’ve researched, these are all lovely destinations you shouldn’t miss, especially if you have several days to spend in Kakheti province:

Get our FREE DIY Yerevan walking tour and itinerary here.

One thought on “Travel to Kakheti, Georgia in a Day: Of Telavi, Signagi, Wine Tours and Bread Making”