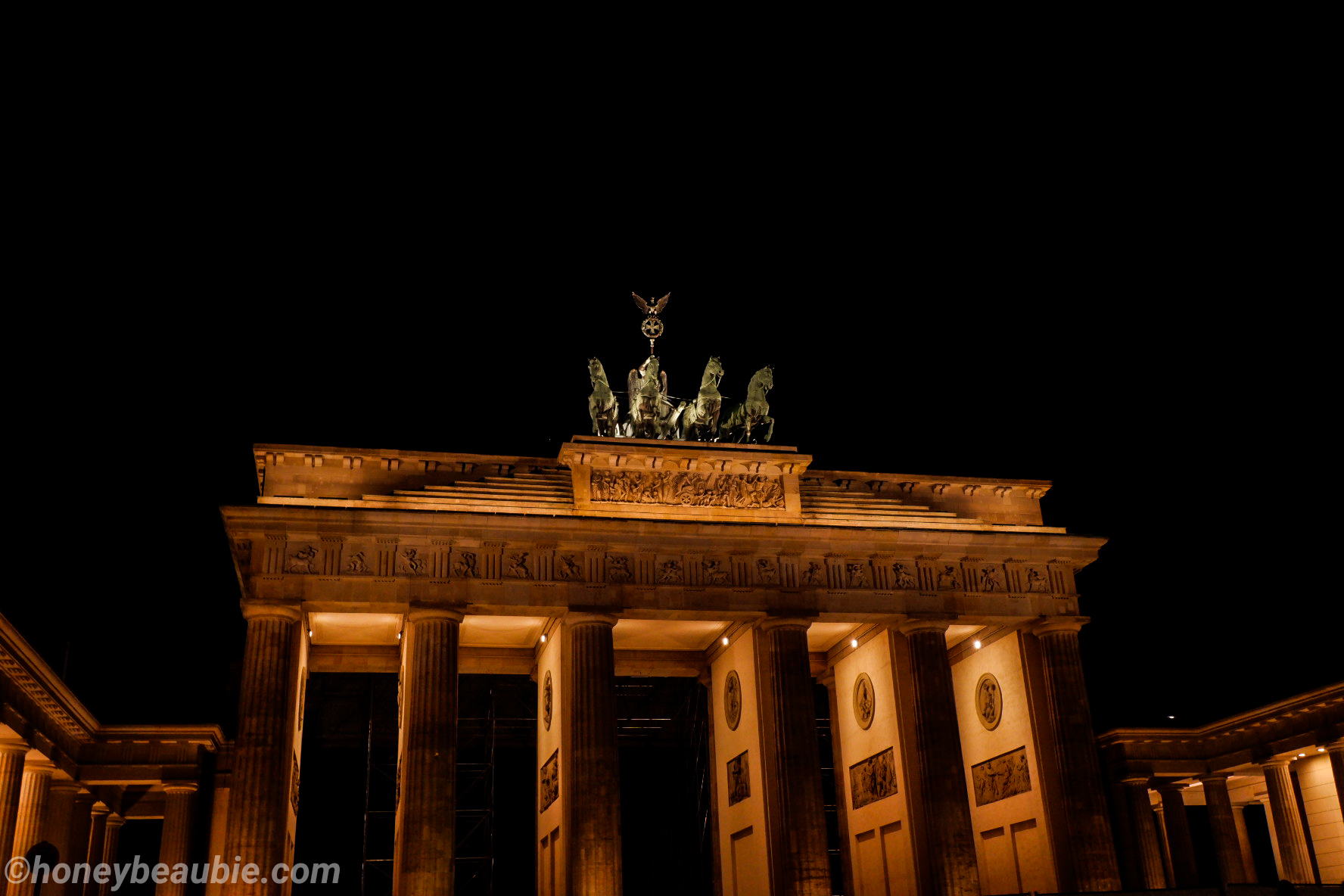 Our Travel Experience in Berlin

The capital city of Germany, Berlin is the country’s central hub of history and culture, power and politics, art and music.

We spent a brief two days in Berlin – it was not enough to intimately know the city, but it was enough for us to know we’ll definitely come back to Berlin someday. My husband loves its hipster, artistic vibe, its gritty, classy feel, and its every corner that tells a story of art and history.

(I prefer classically beautiful Munich, but I love Berlin too.)

We’re sharing our quick and lazy 2-day Berlin itinerary below. We didn’t have much time, but we also didn’t want to hurry our experience. We wanted to savor every moment of our time in Berlin.

After a quick rest and shower, we headed out for our FREE Berlin walking tour:

The starting point of our tour, Brandenburg Gate is one of the most iconic landmarks in Berlin.

“Brandenburg Gate is Berlin’s most famous landmark. A symbol of Berlin and German division during the Cold War, it is now a national symbol of peace and unity.” – From Berlin.de, the official website of Berlin.

Some of the historically significant events that happened at Brandenburg Gate include:

The Berlin Wall was erected overnight on August 13, 1961 to divide West Berlin and East Berlin.

After World War II, Berlin was occupied by different powers: United States, Britain and France made up West Berlin, and the Soviet Union controlled East Berlin.

Residents living in East Berlin were trying to escape to West Berlin, hence the Soviet Union put up the wall to encircle the West and posted guards at entryways. The Berlin Wall was not just a division between two places, but two separate ideologies as well: the Democratic West and the Communist East.

Memorial to the Murdered Jews of Europe (Holocaust Memorial)

The memorial is dedicated to all the Jews and other victims of Adolf Hitler during the Holocaust period. After seeing this, it became all the more incomprehensible to me how some people could think this never happened at all, that it was all some fabricated story.

The victims of the Holocaust – the Jewish people, the people of different nationalities who helped them, the homosexuals, the minorities – their great sufferings and inhumane deaths do not warrant unbelief and denial. That is the most insulting thing one can do to them, after all the atrocious things they went through.

I know Israel is not free of faults, but it does not mean we should deny that this massive genocide happened at all. Like with the genocides and wars happening (or that happened) around the world – Khmer Rouge in Cambodia, Rohingya in Myanmar, the war in Syria, the genocides in Africa – the least we can do is acknowledge their sufferings, their lives, their deaths and their stories.

The Memorial to the Murdered Jews of Europe was designed by American architect Peter Eisenman and engineer Buro Happold.

The last stand of Adolf Hitler. Below this ordinary parking lot was Hitler’s final underground base.

One of Berlin’s four oldest universities, Humboldt University was built on Humboldt’s concept of “mother of all modern universities.” The university had four classical faculties: Law, Medicine, Philosophy and Theology. It was originally named Friedrich Wilhelm University.

The Konzerthaus in Berlin is a neo-classical concert hall originally designed and built by Friedrich the Great, King of Prussia, as a theatre in the 18th century.

Among the Konzerthaus’s most notable performances include that of Wolfgang Amadeus Mozart, Niccolò Paganini and Franz Liszt.

You can read some more about the Konzerthaus here, while you can check the events and buy tickets here.

When East and West Germany were still divided, Checkpoint Charlie was one of the few gateways between the two areas.

It was also a popular site for many escape attempts by people from the East risking their lives just to go over the wall.

If you want to know more about Checkpoint Charlie, check this out: https://www.history.com/news/8-things-you-should-know-about-checkpoint-charlie.

The tour took about 2-3 hours, although it doesn’t seem like we didn’t go to many tourist attractions in Berlin. That’s because we walked around the city to get to one point to another, and during our stops, our tour guide shared a lot of interesting and helpful information with us.

I’d say it’s definitely worth your time and effort, especially because you’re getting a great tour for free!

After our Berlin tour ended, we roamed around a bit and eventually went back to hotel to freshen up for dinner.

Zur Haxen is a fabulous restaurant in Berlin that serves traditional German food. Their restaurant has lovely interiors, welcoming and attentive staff, and superbly delicious food! We were not disappointed at all!

We explored more of Berlin and saw how it was during the night – completely safe, beautiful and enjoyable!

We found a free movie showing on one of the streets, some runners sweating it out together, restaurants and pubs filled with people, and police patrolling the city.

Another noteworthy building in Berlin is Hotel Adlon.

The best Salzburg day tour itinerary that will make the most of your time and how to best get a Salzburg City card.

We woke up early and enjoyed a hefty breakfast, courtesy of MEININGER Hotel’s breakfast buffet!

Our first stop was the city’s iconic Berlin Cathedral. It’s a shame that part of the Cathedral was being renovated at that time, so I had quite a challenging time taking photos. It’s a beautiful sight nonetheless!

Our next stop was the East Side Gallery of the Berlin Wall, which we had to find on our own! We got there after lunch and didn’t have enough time to see all the murals on the wall. But we were happy to have our own Berlin Wall tour.

TIP: Allot 2 hours to explore the Berlin Wall if you really want to savor and maximize your time there.

We passed by Checkpoint Charlie again and tried Berlin’s currywurst (curry sausage) – a must try in Berlin! It was so delicious I just had to have more! I think I gobbled 3 servings of currywurst.

We also dropped by a few souvenir stores to buy presents for our hosts in Germany – special mention to Aling Fely and Gerhard and Amay (did we bring you anything? Lol.)

I don’t know if it’s just Berlin or Germany as a whole, but the souvenir shops in Berlin have a quirky, unique and delightful selection of souvenirs.

Our last stop was the Memorial to the Murdered Jews of Europe, which we only passed by yesterday at the tour. This time, we went inside the museum. It was such a sobering, unforgettable and emotional experience for us, so I’m dedicating a separate post for it.

And we had a sumptuous dinner at a Chinese restaurant before we went back to our hotel and prepare for our night trip back to Munich.

Our Hostel in Berlin (with free breakfast buffet!)

MEININGER Hotel Berlin Alexanderplatz has modern artsy interiors that just exude this unique and undeniable Berlin vibe. Their staff were also very kind and helpful. Even when we were just booking online via Booking.com, they responded promptly to our requests and inquiries.

And we especially loved their breakfast buffet, which is full of healthy and delicious choices! Overall, MEININGER Hotel in Berlin offers great value for money!

How to Travel from Munich to Berlin by Bus

My brother-in-law booked us FlixBus tickets for our travel from Munich to Berlin. (He lives in Germany, so we appreciated the local knowledge! Not only our tour guide, he was also our interpreter most of the time!)

FlixBus is a Germany company providing intercity bus services in European countries and even in the US.

TIP: The best views on the bus are on the second level, right at the front – and this is probably why you need to pay the reservation fee if you want to sit here. We didn’t know so we were kicked out of the front seats!

Best to book your bus tickets in advance since the seats can fill up fast.

4 thoughts on “Our 2-Day Tour in Berlin, Germany: Quick Itinerary, Top Activities and Free Things to Do”