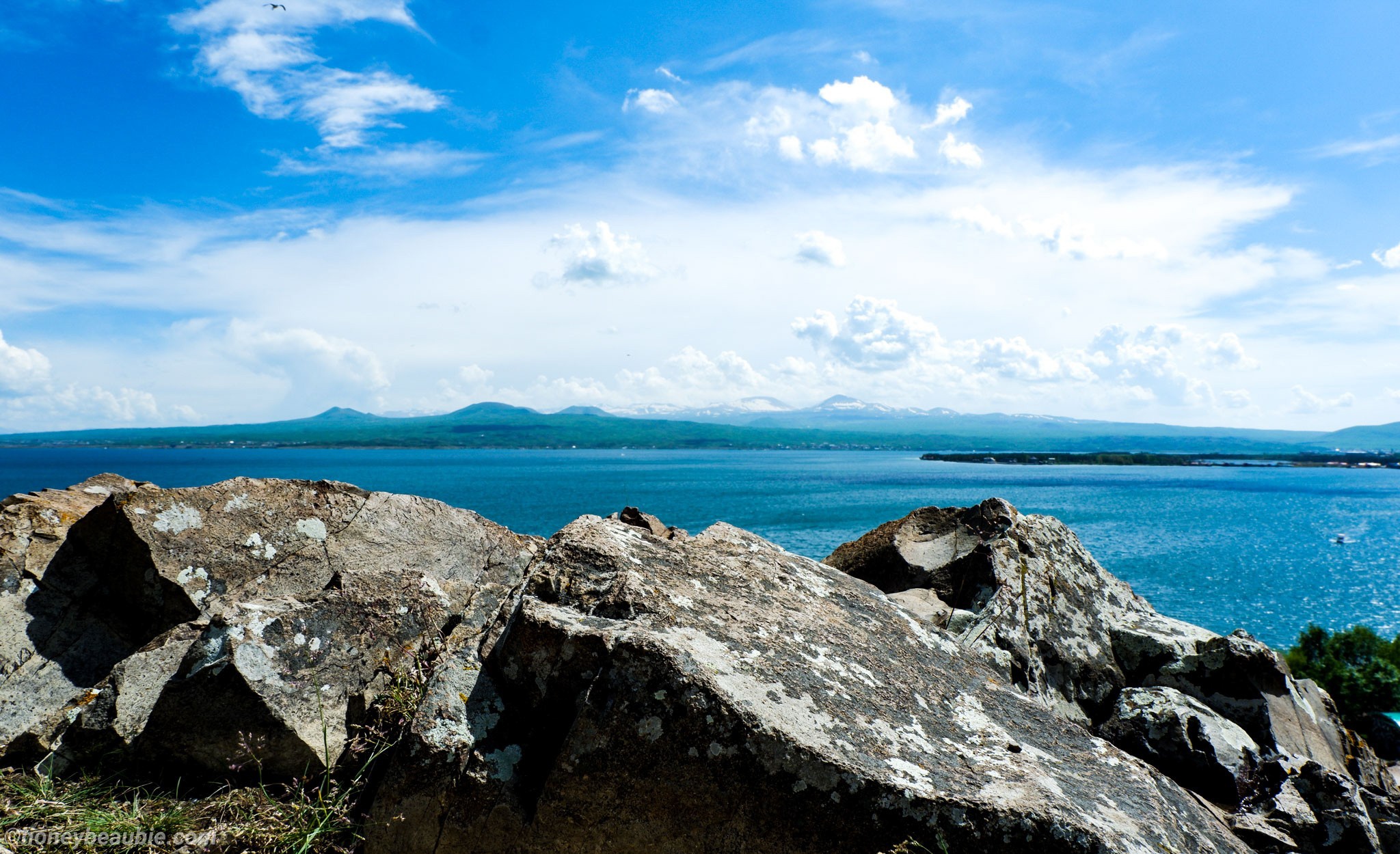 We initially wanted to do a backpacking day tour of Armenia but (thankfully!) we changed our minds. We engaged the service of Norik, the owner of a local tour company who was referred to me by a friend. Out of all the Armenia tour companies I’ve gotten quotations from, his day trip to Garni, Geghard and Lake Sevan was the most affordable so we didn’t hesitate in choosing him.

The tours usually start around 9AM but could be earlier or later depending on the availability of the guests. There were only 6 of us in the van, excluding the driver, Narek, who is Norik’s brother. 😊 We liked that we weren’t crowded in the vehicle, just enough to make the trip more fun and interesting.

The Arch of Charents

A quick stop at the Arch of Charents where you get to enjoy uninterrupted views of nature. We just really spent a few minutes taking in the scenery and as much photos as we can fit within the 15-minute detour.

Our driver didn’t provide much information on the Arch of Charents, so I had to do my own research to know more about the place.

Did you know that the Arch of Charents…

The Geghard Monastery complex is a UNESCO Heritage site completed in the 13th century. It comprises numerous churches and tombs, most of which were carved into the rock and thus once earned the monastery the name, Ayrivank, meaning Monastery in the Cave.

Majority of the monuments in Geghard’s monastic complex date from 4th to 13th century AD and are the epitome of Armenian medieval architecture.

Geghard Monastery is one of the most popular destinations in Armenia, and most Armenian tour packages include it in their itineraries. It’s also just near Yerevan, about an hour drive from the capital city.

What I loved most about Geghard is it’s still well-preserved, and I think it’s still being used by resident Christians there. There was even an area where people would sing, and the structure’s acoustics would channel their voices beautifully!

The Pagan Temple of Garni

The Temple of Garni (or Garni Temple) is a pagan temple built to worship the sun goddess Mythra. To date, it is the one and only standing Greco-Roman colonnaded structure in all of Georgia.

Although various historical records indicate different dates, it is commonly accepted that Garni Temple was erected around 3000 BC, a time before (Orthodox) Christianity came into Armenia. The Temple of Garni’s architectural design is faithful to the ideal geometrical principles of Pythagorean and Platonic theories.

Since it’s one of the most popular destinations in Armenia, expect a lot of tourists to be there with you, especially during peak season. Wear comfortable shoes so you can walk around, climb up the steps of the temple and further explore its surroundings. There are also paid public comfort rooms in the area, in case you need them.

We thoroughly enjoyed its picturesque location, although a friend showed us a photo of the Temple of Garni in winter and it’s just as beautiful! All covered in white and looking so serene.

The picture-perfect Lake Sevan was a sight to behold! We mostly enjoyed its views when we came to the Sevanavank Monastic complex, which overlooks the vast blue expanse of the lake.

Lake Sevan holds the title of “the largest body of water in Armenia and the entire Caucasus region.” It is also one of the largest freshwater high-altitude lakes in Eurasia and worldwide.

(TRIVIA: Lake Titicaca in the border of Peru and Bolivia is the largest alpine lake in the world.)

We had a lovely lunch at a restaurant situated right beside the lake, but it was too hot then to explore. Still, we had such a great time eating delicious food while surrounded by Sevan Lake’s fantastic views!

As far as I can remember, our trip from Garni to Lake Sevan took about 1.5 to 2 hours. It’s a bit of a drive, so bring snacks with you in case you get hungry during the tour.

In our case, we bought some traditional sweets from vendors at the foot of the Geghard Monastery complex. Armenians call this rojik or sweet sujukh. We found – and made! – something very similar during our tour in Georgia, but they call it churchkela there. These sweets are mostly made of grape or mulberry juice with walnuts in them and they’re left to dry.

Completed in the 9th century, Sevanavank is a monastic complex nestled on the north western shore of Lake Sevan, within Gegharkunik Province. The Sevanavank Monastery is composed of two cross-shaped churches: Surp Arkelots (which means Holy Apostles) and Surp Astvatsatsin (Holy Mother of God).

An inscription in one of the churches indicates Sevanavank was established by Armenian princess Mariam as part of her plan to commission 30 churches in honor of her late husband. Princess Mariam was the daughter of Ashot I, who eventually became king 10 years later.

The Sevanavank churches were built using black tuff, a rock made of volcanic ash, which was probably the reason the monastery was named Sevanavank, which means The Black Monastery.

I loved all of our stops in our day tour but Sevanavank Monastery wins hands down!

Its beauty is just astounding! We probably spent almost 2 hours in the area taking photos but it still wasn’t enough. I wanted to explore further and further but we had limited time. It was a really beautiful place that’s meant to be savored over and over again!

The last stop of our whole day tour was Tsaghkadzor Ski Resort. It was a bit of a long drive from Lake Sevan and it was high up so we could really the difference in temperature.

If it was windy in Lake Sevan / Sevanavank Monastery, it was chilly in Tsaghkadzor! Brrrr.

It’s not ski season yet so the resort was empty, but you could still take a ride up the cable cars.

We didn’t, though, because we were afraid! Haha! The cable cars were just secured by a metal bar and I was too scared to try it.

Missed my blog on our DIY walking Yerevan tour? Here’s an easy guide for you! https://honeybeaubie.com/yerevan-tour-armenia/

If you’re looking for budget-friendly but activity-filled Armenia group tours, let me know so I can hook you up with our tour provider! Leave a comment so I can share my tour provider’s details with you. 😊