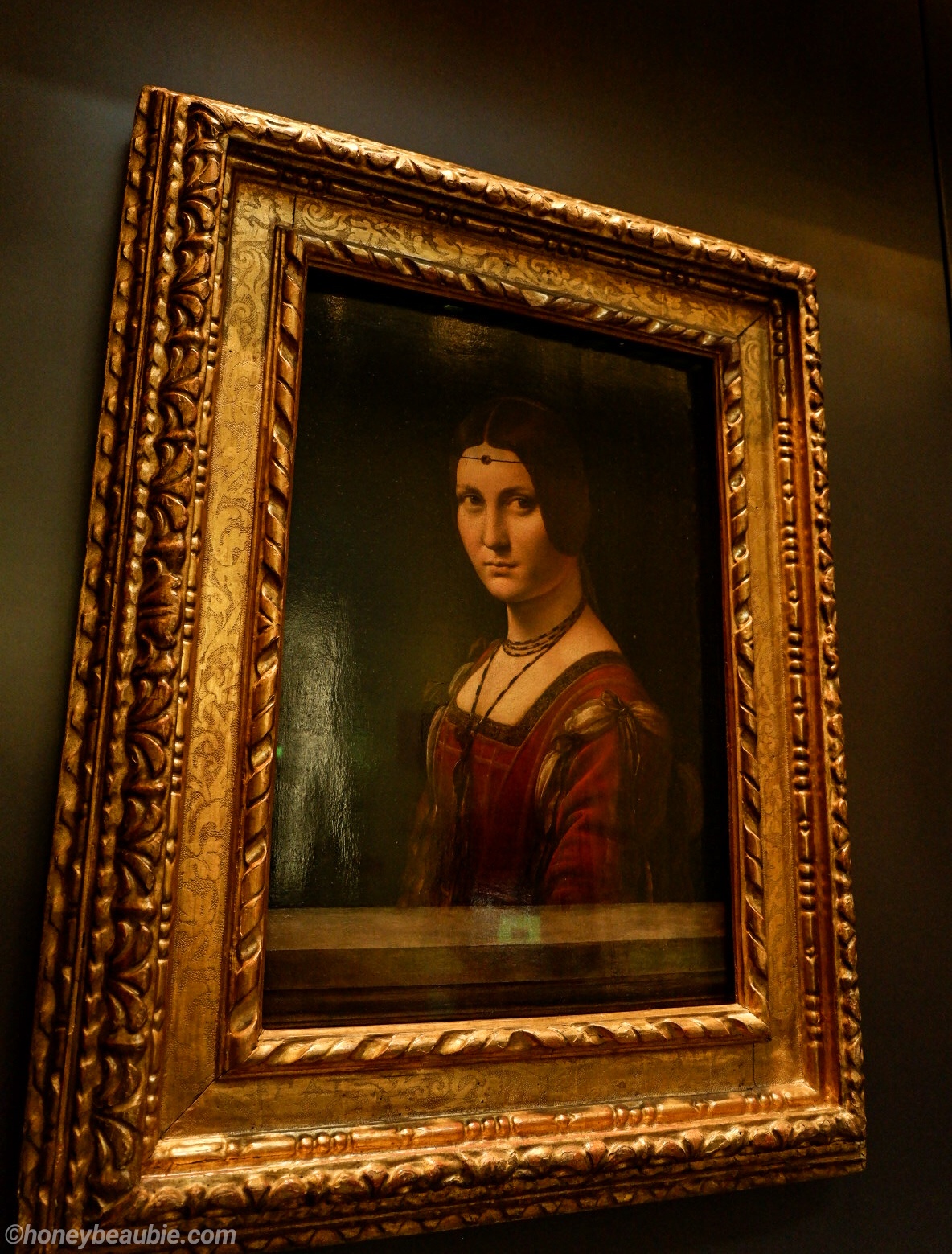 Inside the Louvre Museum in Abu Dhabi

The Louvre Abu Dhabi is the fruit of the collaboration between the Emirate of Abu Dhabi and the French government to bridge the gap between Eastern and Western art.

Situated on the Saadiyat Island Cultural District, the Louvre Abu Dhabi Museum opened its doors on November 8, 2017 and has since showcased historical, contemporary and noted paintings, sculptures and artwork from famed and budding artists worldwide.

From classical sculptures to modernist paintings, Louvre Abu Dhabi boasts a vast collection of artwork from the famous and the lesser known, the celebrated and the notorious, the revered and the aspiring talents from across the globe.

Quick Facts about the Louvre Museum in Abu Dhabi

Disclaimer: The Euro conversions were calculated based on current exchange rates as of this blog’s writing. The actual amount may differ from the time the transactions were made.

What paintings and artwork are featured in Louvre Abu Dhabi?

The art collections exhibited at Louvre Abu Dhabi come from all over the world. But what I particularly like is that they have famous paintings loaned from the Louvre Museum in Paris.

I never imagined I would be able to see the works of Leonardo da Vinci, Picasso, Vincent van Gogh, Paul Gaugin, Claude Monet, and Jackson Pollock without leaving the UAE.

Leonardo da Vinci is one of my most favorite artists of all time. Even before I had art classes in college, I was already acquainted with his name, thanks to the Mona Lisa, his most celebrated and well-known work. He is my favorite Renaissance artist, next to Michelangelo (David, Pieta, The Creation of Adam and the Sistine Chapel ceiling) and Botticelli (The Birth of Venus).

The name Picasso is very easy to remember, just like his distinctive Cubist paintings. I’m not particularly a fan of Cubist art as I prefer traditional paintings, but I do appreciate his talent and I’m overjoyed to have seen one of his works!

Like da Vinci, Vincent Willem van Gogh is a familiar name to me. I especially remember him because of a story arc from the anime Get Backers, haha! So, I know he has this Sunflower painting series, one of which I happened to see at a museum in Munich. And I saw another one of his artwork at Louvre Abu Dhabi.

The left one is displayed at Louvre Abu Dhabi, and the right one is in Munich.

Vincent van Gogh has always intrigued me because of his troubled life and mental instability (he cut off his own ear!), and I think I read or watched a feature about him saying his talent was recognized only after his death (suicide). He was considered crazy and a failure as an artist.

He slowly gained post-humous recognition and fame when his sister-in-law, Johanna Gezina “Jo” van Gogh-Bonger, sold van Gogh’s works, loaned them for exhibitions and published his letters to his brother and Jo’s husband, Theo.

I won’t pretend. I don’t really know much about Paul Gauguin except that he was a dear friend of van Gogh, which I only recently learned through an audio-guided tour in Munich. Maybe that’s why Gaugin and van Gogh share similar artistic styles in paintings. Their friendship reportedly ended after an altercation.

Oscar-Claude Monet is another artist I can easily recall because 1) his name is memorable for me, as I like the way Monet (mou’nei) is pronounced; 2) he helped create this distinct Impressionist style that appeals to me because I think it’s perfect for painting dreamy and surreal landscapes; and 3) he was just as exceptional in traditional painting.

I can’t remember why I knew Jackson Pollock but when I read his name on the label of an abstract painting at Louvre Abu Dhabi, I knew I’ve read about him somewhere, somehow. Not really a fan of abstract paintings but I must admit this one is captivating in a way.

Other famous paintings & artwork exhibited at the Louvre Abu Dhabi

The Horses of the Sun by Gilles Guérin, 1670
It is a 350-year-old monumental sculpture, commissioned by France’s King Louis XIV in the late 1660s. Before being displayed at the Louvre Abu Dhabi, it was exhibited at the Palace of Versailles.

A sculpture of Shiva dancing

Some more artwork exhibited at the museum:

From Greece and Japan, to China and India, the Louvre Museum is a cornucopia of paintings, sculptures, and works of art from various places and rich cultures around the world.

The museum is ideal for people of all ages! For children, they have an interactive Children’s Museum where adults like me also had a great time trying out the fun and colorful displays.

For fans of Japanese comics (also me!), you’ll love the Manga Lab, where you can color comic panels on the walls. There are also free manga, arcade games and virtual reality pods.

How long does a Louvre Abu Dhabi tour take?

I’ve read articles saying it’s possible to tour the museum in 1.5 hours. I don’t know how they did that but it took us 3-4 hours! And we even rushed it a bit because we were pressed for time.

I plan to go back and try to savor the experience as much as I can, and it’ll probably take me 5-6 hours. That’s because I try to take many photos of art pieces that I like, and I try to read the descriptions as much as possible.

What is the dress code at Louvre Abu Dhabi?

Dressing conservatively is always my motto here in the UAE. Avoid plunging necklines, see-through blouses or dresses, short shorts and miniskirts, and any other skimpy outfit.

Casual or smart casual is okay. My suggestion is to dress as comfortably as you can because you’ll be walking for hours. Wear comfy shoes!

Yes, you are free to take photos inside the museum, whether it’s selfies, groupies or photos of the artwork. However, flash photography is strictly NOT allowed.

Selfie sticks are also not allowed, so it’s safe to assume camera tripods are not allowed as well.

To be on the safe side, just use your camera or mobile phone.

How much are the tickets to the Louvre Museum in Abu Dhabi?

The following individuals may avail discounted ticket prices at 30.00 Dirhams each, plus 1.50 Dirhams tax (total of 31.50 Dirhams per ticket):

Complimentary tickets are given to:

The ticket prices indicated here are correct at the time of the blog’s writing. I’ll try to update these, but just to be sure, you can check directly with Louvre Abu Dhabi’s website.

I strongly suggest to buy your tickets online for your convenience. 😊

What are the timings of Louvre Abu Dhabi?

The museum is closed on Mondays.

Do they offer guided tours?

The museum offers a variety of group tours and guided tours daily, except Mondays. You can check them here. Louvre Abu Dhabi also offers audio-guided tours in various languages.

Directions – How to go to Louvre Abu Dhabi from Dubai?

If you’re traveling on E11 road, take the Saadiyat Island/Yas Island exit, then continue on to Sheikh Khalifa Highway E12. Then drive through Yas Highway to the Cultural District on Saadiyat Island.

The museum offers free parking, while valet parking services are available at 42 Dirhams.

Get on a Route 94 public bus. It will stop at Louvre Abu Dhabi. Fare is 2 Dirhams per person.

Take note! The Route 94 bus offers transportation from Abu Dhabi City to the museum. If you’re coming all the way from Dubai, you must get to the Abu Dhabi Central Bus Station first then get on the Route 94 bus:

A drop-off / pick-up point is located in front of the museum’s main entrance.

If you’re coming by bus from Dubai, you can get a taxi at the Abu Dhabi bus stop.

2 thoughts on “Louvre Museum, Abu Dhabi: A Taste of Paris, France in the UAE”