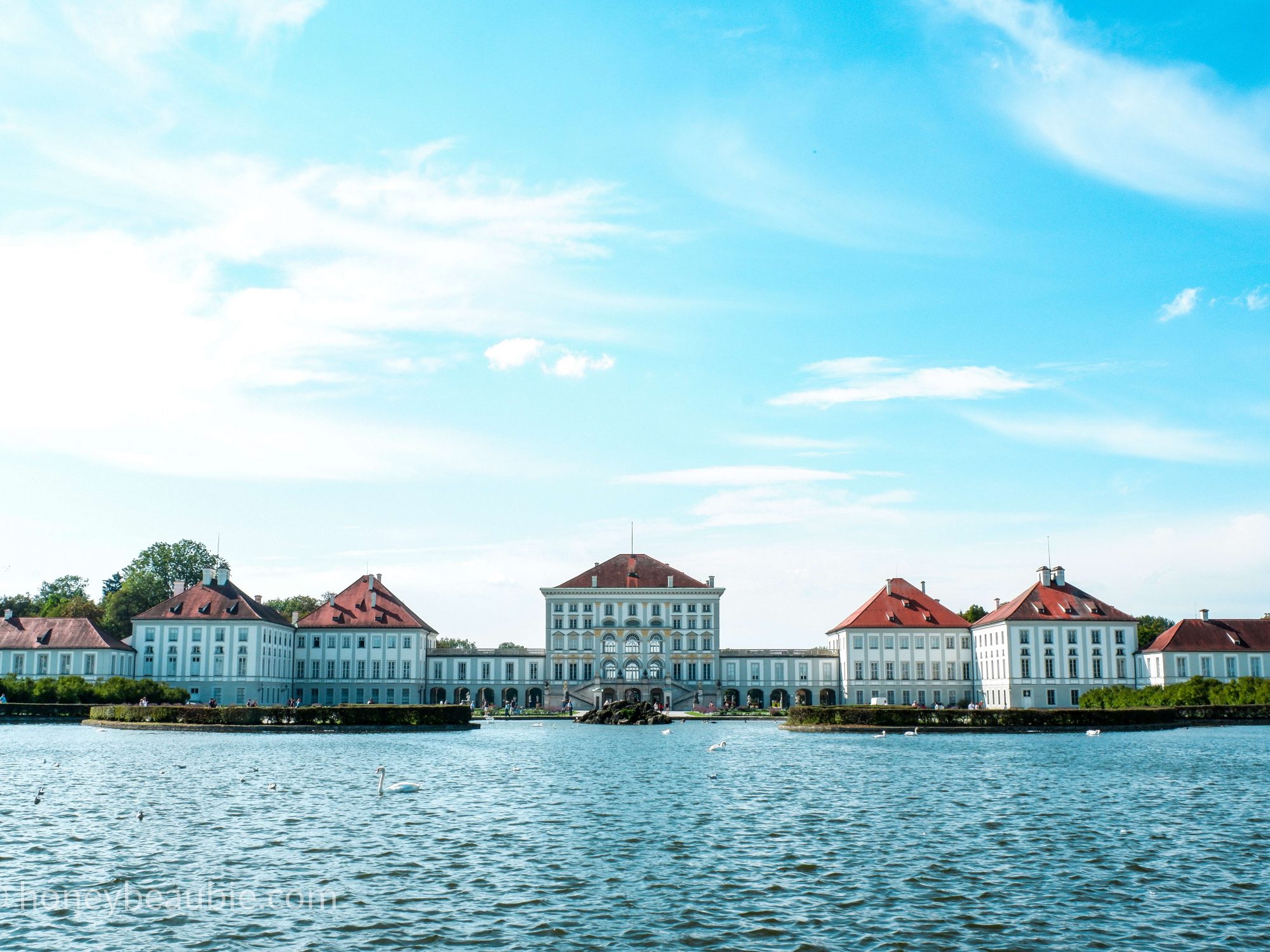 Nymphenburg Palace in Munich: Why It’s One of the Top Destinations in Germany

Massive and grandiose, the Nymphenburg Palace in Munich is an iconic landmark that’s truly hard to miss – and shouldn’t be missed!

Showcasing an immense wealth of history, paintings, sculpture and cultural heritage under one huge roof, the Nymphenburg Palace is worth a whole day’s visit, even if it leaves you with sore legs and feet the next day after hours of walking.

PRO TIP: Allocate at least half a day for exploring Nymphenburg Palace. We actually spent almost an entire day but it still wasn’t enough for us to comb through the enormous estate, which covers the main pavilion and its wings, the 200-hectare garden, some museums and other garden pavilions.

One of the numerous and lavishly decorated rooms inside the Nymphenburg Schloss.

If you are like us who prefer to listen to audio guides while taking a close look at each and every one of the numerous royal apartments, then you will also probably need a whole day at Schloss Nymphenburg.

AND IT IS ABSOLUTELY WORTH IT.

How to Go to Nymphenburg Palace in Munich

Most of our day tours in Munich started off with a train ride from Munich Central Station, or München Hauptbahnhof in German.

To get to Nymphenburg Schloss from Munich Central Station, we took the U1 train headed to Olympia-Einkaufszentrum. We got off at Rotkreuzplatz station, where we took a tram going to Amalienburgstraße. But we got off at the Schloss Nymphenburg stop. From there, we walked leisurely to the famed summer residence.

After a few days in Munich, we were more familiar with how the trains worked so it was quite easy to get to Nymphenburg. It helps that it’s a popular tourist destination and just a few minutes away from Munich’s city center.

OUR 2-DAY TOUR IN BERLIN, GERMANY: QUICK ITINERARY, TOP ACTIVITIES AND FREE THINGS TO DO

What to See Inside the Nymphenburg Schloss

Testament to the extravagant lifestyle of Bavarian aristocrats, Schloss Nymphenburg houses a multitude of ornately designed royal apartments that served specific purposes: from splendid bedrooms and bathrooms, to a magnificent grand hall and elegant antechambers, salons, study and audience rooms.

With construction starting in 1664 and concluding in 1675, the Nymphenburg Palace is heavily influenced by the Baroque architectural style, which is characterized by excessively elaborate interiors and extravagant ornaments. Later on, the palace was redecorated to infuse Rococo and Neo-classical themes.

A green tea or study room?

Marstallmuseum – The Museum of Carriages and Sleighs

Located in the former royal stables, where the most prized horses are kept and cared for, the Marstallmuseum showcases a rich collection of coaches, carriages and sleighs from 17th to 19th century.

Among the notable pieces displayed in the exquisite collection include the Coronation Coach of Emperor Karl VII and the state carriages of King Ludwig II.

“With over forty representative coaches, sleighs and riding accoutrements that belonged to the Wittelsbachs, the museum documents three hundred years of princely coach building and travel and riding culture.” – https://www.schloss-nymphenburg.de/

The Museum of Nymphenburg Porcelain

On the upper floor of the Marstallmuseum is an exclusive collection of fine china dating from 18th to 20th century.

To date, it still produces high-quality porcelain and is one of the few remaining ones in the world that still make every piece entirely by hand.

The collection displayed inside the palace was a brainchild of Albert Bäuml who took control of the manufactory in 1888.

After we finished our tour inside the main building of the Nymphenburg Palace, we mustered our remaining energy to explore the immense gardens lying outside, as well as the beautiful garden pavilions tucked away in secluded spots in the vast property.

The Amalienburg was commissioned by Elector Karl Albrecht in 1734 as a pleasure place and hunting lodge for his wife, Maria Amalia, daughter of the Emperor Joseph I of the House of Hapsburg.

Each room bears the same air of ostentatious extravagance with its European Rococo interiors but with individually unique themes.

It is my favorite among the garden pavilions, as its charming light pink façade immediately won me over the first time I saw it.

Its luxurious furnishings have a distinct feminine charm brought about by a harmony of pastel colors and intricate and meticulous details.

Completed in 1722, the Badenburg was built solely to provide a lavish private space for bathing.

“In the Monkey Cabinet the Elector performed his toilette. It was the first major building in Europe for centuries that was exclusively for the purpose of enjoying a comfortable bathroom.” – Schloss-Nymphenburg.de

Another work by Effner, Pagodenburg is a small resting place where the nobles would stay usually after a game of Mailspiel, a sport that’s pretty much like golf.

Although retaining a classically European style, the Pagodenburg exudes an exotic appeal thanks to Arabic, Indian and Chinese aesthetic influences.

How much time do you need to tour Nymphenburg Palace?

Maybe 1 to 2 hours will do if you just want to look around the palace and its surroundings.

However, if you want to really absorb all the history imprinted in the arts and architecture of Nymphenburg Palace, as well as its gardens and park pavilions, I would say at least spend at least 3 to 5 hours in the entire complex.

When was the Nymphenburg Palace built?

Construction began in 1664. The central pavilion as completed in 1675 and the entire palace complex around 1679.

How to buy tickets for Nymphenburg Palace?

We bought Nymphenburg Palace tickets at the site itself. We got Combination tickets which included access to the palace, the Marstallmuseum and porcelain museum, and the park pavilions.

Reduced ticket prices are available if you only want to visit certain areas of the palace complex. More information is available here.

What are the opening hours for Nymphenburg Palace?

NEED MORE TRAVEL INSPIRATIONS IN GERMANY? CHECK OUT THESE 8 AMAZING REASONS GERMANY’S OKTOBERFEST SHOULD BE ONE OF YOUR TRAVEL GOALS!

Here’s a swan! Thank you for reading!